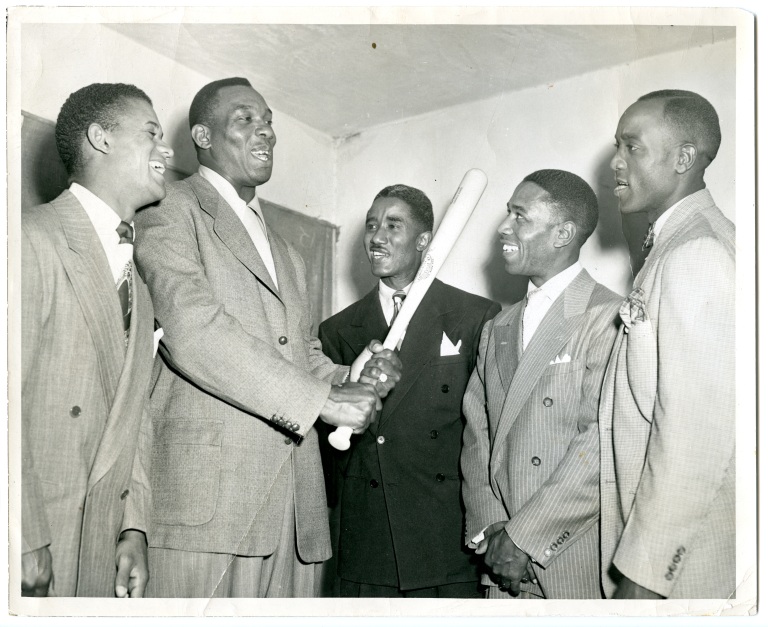 This photo has always made ponder the question, “What are these men doing?”.

This is the second part of a column I wrote called the “The PCL and the Color Line“, which was posted by John Thorn in Our Game, that wonderful MLB blog that I hope everyone takes the time to drop by and read when they get a chance. I’d like to thank John for taking the the time to address social construct of the “color line” as a part of baseball history research, that affected both sides of a conflict which seemed to run parallel to the social structures of American history. One side was publicly seen and well documented, while the other side has researchers and members of the Jerry Malloy Negro League Conference group diligently piecing together this lost history with limited information at our access.

This is why they say, “A Picture Is Worth A Thousand Words”.

From this photo, one could surmise that there were two very important gentlemen in the background who remained unseen. They were very well known in the sporting world and wielded great influence and power when it came to negotiating contracts, written and verbal, and also when it came to scouts, or agents who acted as “scouts”, and Negro League players looking to break the color line in Major League baseball.

Those two gentlemen were Abe Saperstein and Bill Veeck.

Abe Saperstein was President of the West Coast Baseball Association in 1946, and one of his associates in the newly formed league was Ed Harris, Business Manager for the Oakland Larks. We’re all aware that the WCBA didn’t last very long, but their were two teams that remained active for years beyond the 1946 disbanding of the WCBA. The Oakland Larks and the Seattle Steel Heads barnstormed the West, Midwest, the South and Canada as long as they could find teams to play against and fields to play on. The Seattle Steel Heads changed their name to the Harlem Globetrotters baseball team. They continued to barnstorm where ever they could bring in a crowd. Saperstein was officially disconnected from the former WCBA Oakland Larks by then, and continued to pursue his exploits in basketball and baseball with his early Harlem Globetrotters, and his A.M. Saperstein Sports Enterprises.

By the same token, Saperstein chose to hide his ownership of the Seattle Steel Heads.

Following the baseball and money trail, we’ll make a stop along the early route to acknowledge the existence of  the Cincinnati Crescents, which was one of the teams that was also connected to Abe Saperstein, and one of the teams that Luke Easter starred on. The Cincinnati Crescents would eventually become the Seattle Steel Heads. Abe Saperstein also owned the Birmingham Black Barons in 1940.  Abe Saperstein created something very interesting when it came to sports management. It was a moving, living, breathing sports agency–with every finger in as many pies as he could possibly place them in. Basketball players that played baseball and vice versa.

There was a massive connection between these teams and Abe’s Sports Enterprises company, as well as the people he was formerly connected with in the WCBA when it came to moving his stable of players, or any former players like chess pieces, into the world of Major League baseball. Abe learned from his early experiences as a coach for the Savoy Big Five, that players remained loyal when they are well paid and treated with respect. Abe would make sure he would not be placed in the same position that T.Y. Baird had been placed in when Jackie Robinson accepted Branch Rckey’s offer to play in the bigs. Saperstein was also a master salesman who had no love for Jackie Robinson, and never minced words about it. The fact that Robinson could be the straw that broke the back of A.M. Saperstein Enterprises, because Robinson and Rickey were receiving massive media attention, angered Abe Saperstein. Other Negro ball players of exceptional caliber were being overlooked, and this made Abe no advocate of integration unless it was on his terms.

The move to create the West Coast Baseball Association, as so aptly put by Dr. Heaphy, was Abe’s way of showing that “black baseball still had life” [2], and that Branch Rickey’s signing of Jackie Robinson was not a death knell to the Negro Leagues. This move also contained another aspect to Saperstein’s business ventures, which was the creation of a barnstorming slash farm venture, which helped maintain what Abe felt was his legitimate right to negotiate contracts with Major League baseball teams for players working under his A.M. Saperstien Enterprises umbrella. By maintaining the Seattle Steel Heads in the North West as a ‘silent owner’, and keeping in contact with Ed Harris, business manager of the Oakland Larks, who’s continued to barnstorm between late 1946 to 1948, in small towns all over America, Abe’s continued connections to his past associations and acquaintances would allow him to keep tabs on new and upcoming talent in Negro Baseball that wasn’t presently connected with the NNL or NAL.

The Cooperstown Symposium on Baseball and American Culture, 1997,  edited by Peter M. Rutkoff and Alvin L. Hall, mentions the deal that Abe negotiated for Veeck with the Kansas City Monarchs for Satchel Paige to pitch for the Cleveland Indians, in which Abe himself netted a hefty $15,000. In comparison, Luke Easter’s contract only cost Veeck $5,000.[3]

I’m also well aware that these statements contradict the assertion made in “A Baseball Myth Exploded” written by David M. Jordan, Larry Gerlach, and John P. Rossi, that Bill Veeck and Abe Saperstein were not in engaged together for Veeck to buy the Philadelphia Phillies and stock the bankrupt 1942 team with African American players, or as they stated “He (Veeck) did not work with Abe Saperstein and others to stock any team with Negro Leagues stars“.[4] There is a shortsighted assumption made by these gentlemen that ‘back door deals’, in general, do not take place in the world of baseball. What I mean by “back door” is a deal hidden from view of the public. or those not involved in the deal. The fact is, Veeck and Saperstein did try to do exactly that. They tried to stock the Cleveland Indians with stars, and it was a process created over time, and they used others to perform their scouting task.

As I said before, a picture is worth a thousand words. 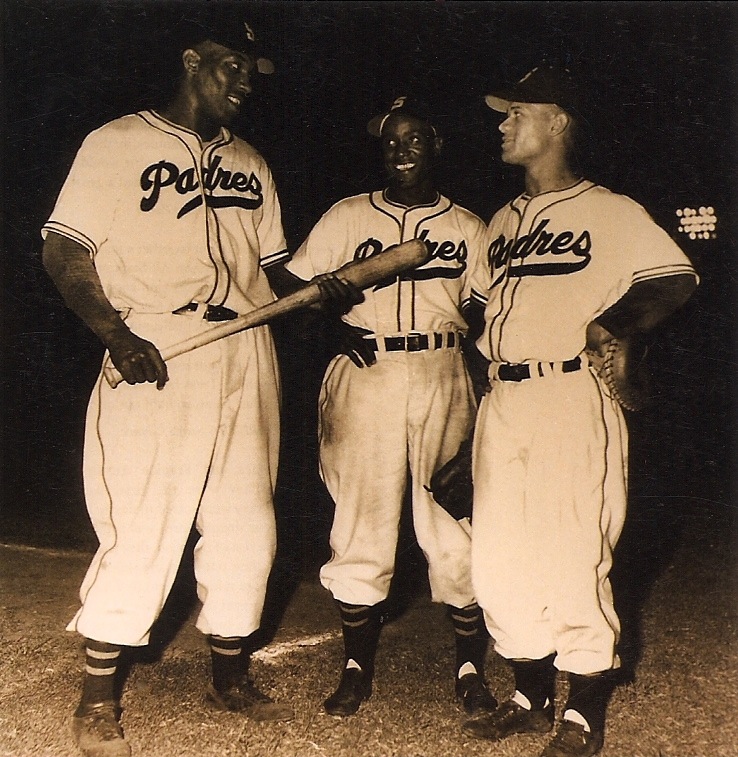 We’ve established that Luke Easter’s contract was purchased by Bill Veeck, and we know that Easter previously played for the Cincinnati Crescents. Artie Wilson was also wooed by Veeck, according to Paul Dickson, in his book, “Bill Veeck, Baseball’s Greatest Maverick”. Dickson stated that Veeck “flew unannounced to San Juan to sign shortstop Artie Wilson, who was playing off-season ball for the Mayaguez Indians of the Puerto Rican Winter League but during the regular played for the Birmingham Black Barons of the Negro Leagues.”[5].

Of course, according to the legendary tale, New York Yankee’s general manager, George Weiss, claimed that Veeck had engaged in “unethical behavior”.[6]

When I spoke with William Swank, San Diego baseball historian, he told me that John Ritchey was a hometown boy from San Diego, so being signed by the PCL’s San Diego Padres probably had little to do with Veeck or Saperstein. What was the common denominator between Ritchey, Easter, and Willson?

After reading “Curveball: The Remarkable Story of Toni Stone the First Woman to Play Professional Baseball in the Negro League“, by Martha Ackmann, I reevaluated the significance of these two pictures, along with her statement Dr. Ackmann made about a letter written by Ed Harris. The paragraph stood out to me, and I questioned: Was Ed Harris the 1st African American scout for the PCL?

“As impossible as it seemed just three years earlier, Eddie Harris, former business manager of the association, was now working for the formerly all-white Pacific Coast League, scouting black talent for the newly integrated Seals and San Diego Padres. “I believe this is the greatest chance for Negro talent here on the Coast”, he wrote. “If they make good here there is a great chance of making the big League.” Harris asked his friends to let him know of” any good players that you think could make the grade. All their expenses would be paid to California. “They’ll get the best of everything while in spring training…”act quickly,” he said”.[7]

The letter in question is one that was sent to Clifford Allen by Ed Harris in 1949.

The question I pose here is:

Was Ed Harris, by way of a disbanded West Coast Baseball Association, connected to an “intricate scouting system” [8], headed up by people like Abe Saperstein of A.M. Saperstein Sports Enterprises, Bill Veeck of the Cleveland Indians, and also William Starr, owner of the San Diego Padres? William Swank, who I posed this question to, does not believe it happened that way. I respect him for saying so. When I emailed Dr. Ackmann about Ed Harris’s letter to Clifford Allen on Ed Harris being a scout for the PCL, her response was that the subject matter “was not a particularly rich collection for my purposes.”. This is something I agree with also. The documentation about Ed Harris being a scout for the PCL is very lean, but they are in his own words.

I doubt if we researchers will ever find a written contract between Abe Saperstein or A.M. Saperstein Sports Enterprises and Ed Harris naming Harris as a ‘scout’ for the purposes of recruiting Negro League star players for the PCL that could eventually move up to Major Leagues.

The 1948 publicity photo and the photo of those three PCL San Diego Padres in uniform together says a lot more about Ed Harris than what is written on paper alone.

© Ronald Auther 2014-2021. Unauthorized use and/or duplication of this material without express and written permission from this site’s author and/or owner is strictly prohibited. Excerpts and links may be used, provided that full and clear credit is given to Ronald Auther and The Shadow Ball Express with appropriate and specific direction to the original content.